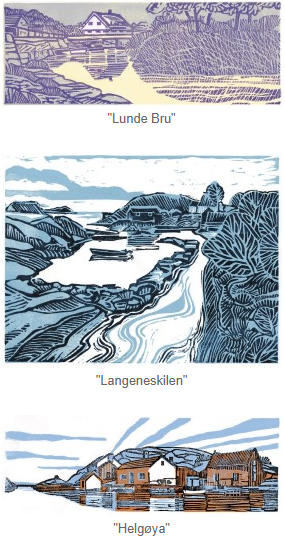 After being made redundant in 2001 and not being able to find another advertising job in London I sold up in the UK and moved to Southern Norway.

I had secured an art director's job in Kristiansand. But when I arrived, the company that I had emigrated to join had gone bankrupt in a failed merger!

After 9/11 it became increasingly more difficult to find employment because local advertising agencies were closing down or not taking on additional staff. It was then that I decided it was time for a complete change.

While a student at Canterbury College of Art I wrote my degree thesis on "The History of Bird Illustration of Great Britain". I gathered historical facts from various library institutions but finding it difficult to research modern artists I planned to interview some of them instead. I was lucky to get to meet Charles Tunnicliffe, Dr. Eric Ennion, Keith Shackleton and SWLA founder Robert Gillmor. (Those artists who I couldn't get to interview personally were sent questionnaires instead.)

Now with spare time on my hands in my newly purchased wooden house in Søgne I decided to write to linocut artist/painter/illustrator Robert Gillmor asking for his help and advice about learning the art of linocutting.

He kindly sent me a six page "How to go about it" letter, a shopping list of what to buy and an invitation to visit his studio when I was next back in the UK visiting my family.

I visited him ...and my passion for linocutting had begun!

If you have seen any linocuts that you would like to purchase, would like to enquire more about my current work or even purchase some greetings cards, then please don't hesitate to mail or call me.

If you should find yourself in the Forest of Dean and would like to see my linocuts at first hand (there would be some framed prints available to purchase too) then please telephone to arrange a visit.

Once you have discussed an order with me, payment can be made via PayPal...

Why not check up on Jackie's creative talents! Click the image to view his pages...